A growing garden is a wonderful thing. I’d like to say lovely thing but it’s not lovely yet. This time of year the vegetable gardens are in their awkward pre-teen stages. It’s early…and spring was early and now it’s too dry and the weather is hot one minute and cold the next and…well…it’ll outgrow it all and be lovely soon. (poor garden)

On the bright side – I have topsoil! We drove past a huge pile of topsoil last weekend and I swooned. Ten dollars a yard, the sign said. Steve came home Monday evening and said “Your topsoil is coming this week.” That’s love. It isn’t just topsoil, it’s projects he knew he’d be pitching in to help with when he placed the order. It’s seven yards of topsoil scraped from a self-storage building site. I’ll be growing garden plants as well as ornaments in this topsoil.

A little rain did wonders for the peas and broccoli. It rained for only ten minutes but it was a jump start. That was Wednesday, and today it’s raining a little again. If we don’t get enough in the next few days I’ll have to water. I’m being conservative with the well these days. It feels like it’s going to be hot and dry summer and growing garden foods isn’t going to be as easy as the last few years.

It’s a lot more interesting in the high tunnel. Steve and I transplanted 18 tomato plants of various varieties last weekend, and with one exception, they’re doing well. One flopped over and died without a fight. Within three days it was gone. It’s now feeding the microherd in the soil and has been replaced with a strong, healthy plant. We went to Gleason’s Cove on Sunday afternoon and picked up two totes of rock weed. I’ve mulched the peppers and two rows of cucumbers with the weed. I’d like to get four totes in the fall. I’ll explain why later. The cucumbers should be popping up in a few days. They’re Ministro, a 49 day hybrid variety from Fedco. I love this cucumber. Love it. It has a great flavor when grown in good soil and does well grown vertically.

The peppers are Hungarian Spice Paprika sweet, two from grocery store peppers because I want to see what they produce, and King of the North, my favorite bell.

Adding for my Five on Friday, how about fruit. I read over the winter that when an apple tree produces unusually heave one year it probably won’t produce much at all the next. The apple trees have been phenomenal the past two years so surely this year there won’t be many apples. If the blossoms are an accurate indication of what’s to come they’re going to outdo themselves. Cherries, too. We don’t know the variety of cherries. They weren’t intentionally planted judging by the way they’re growing. Three trees, too close together, are too tall for us to reach the cherries. They self-seed so there are two smaller trees that will produce this year, and that we can reach. They’re sour so they’re only good to me as jelly or jam but it’s gooood jelly and jam.

I’ve done a lot of writing this week. I’ll spare you the pictures of crumpled yellow sheets ripped unceremoniously from a legal pad. Lots of ripping and crumpling but 5,000 okay words so it hasn’t been a lost week.

What’s going on with you this week? Join us! 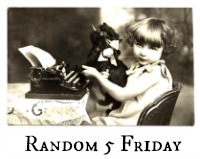 I’m Robin Follette. I’m the wife to a wonderful man and mom to lovely daughters. Award-winning writer and photographer, outdoorswoman, homesteader, and more. Life is good!

I homestead in a tiny town (pop 60) in the remote woods of Maine. Steve and I hunt, fish, forage, raise and grow most of our food. We strongly support local business and are grateful to those who support Tressa & Trudy, our homestead bakery.